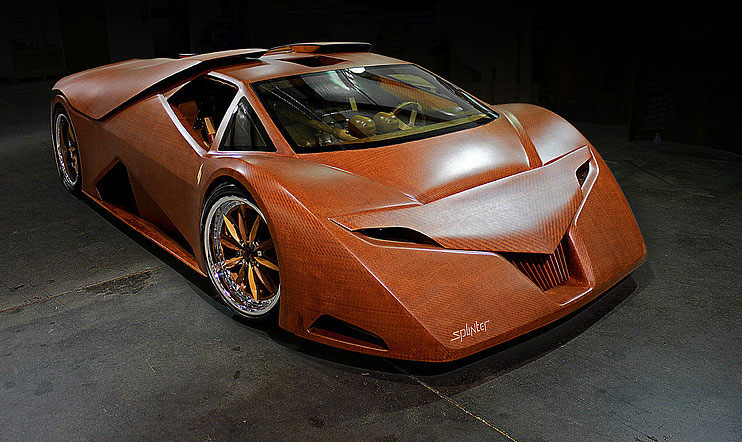 Since the Essen Motor Show in December 2015, the wooden supercar known as “The Splinter” has been making news and creating quite the buzz. This special supercar debut was unlike any other… this supercar is made of wood.

“The Splinter” is a high-performance sports car that took a team led by Joe Harmon five years to create. Harmon started the project as a graduate project while completing his master’s degree in engineering at North Carolina State University.

Why Make a Supercar Out of Wood?

Harman has said that the Splinter was a result of his lifelong love of automobiles and his desire to use wood in ways that would push its perceived limitations. “It has been a dream of mine to design and build my own car since I was a kid. Wood provided an additional challenge that we thought might move the project into an interesting direction,” he explained in an interview.

He also wanted to make a statement about the amazing qualities of wood. Wood is our only naturally renewable building material. Wood takes an extraordinarily small amount of energy to produce and is totally biodegradable.  On the official website he explains that with wood has a better strength-to-weight ratio than steel and aluminum. “Wood can be made into a lot more things than people tend to give it credit for.”

What Parts of the Splinter Aren’t Wood?

The exotic machine is powered by a Chevrolet LS7 engine and other than that and the drive train, gauges, fasteners, tires and rims, the car is made almost entirely of wood composites.  A six-speed manual transmission, and six-piston caliper brakes up front and two-piston calipers in the rear complete most of the critical non-wood parts of the vehicle.

How Much Wood is in the Splinter Supercar?

The Splinter is estimated to be 90% wood. From the mostly wood-based chassis to the steering system, wood composites are the highlight of this vehicle. The steering system uses multi-piece wooden tie rods made of hickory. A series of bent and molded laminates make up the entire body.

The compound curvature of the exterior was achieved by weaving strips of veneer made from cherry skins and end grain balsa into a cloth using two looms designed by the build team specifically for the project. A wide variety of glues were used to keep all of the wood pieces together, including epoxy, urethane, urea formaldehyde, and polyvinyl acetate.

“We talked about it and decided that a leaf spring was nothing more than a bigger, stiffer version of a longbow, so we researched bow making and came upon a wood called Osage orange,” Harmon says. “It’s the strongest wood found in North America, and it has properties that make it excellent for use in longbows.”

How Did They Make the Wooden Wheels?

Each Splinter wheel has 275 different wooden pieces. Michelin Pilot Sport 2 tires sit on three-piece forged aluminum rims with laminated wood centers made from rotary-cut oak veneer, covered by a walnut sunburst on the outside face and a cherry sunburst on the inside.

How Was The Splinter Made?

To achieve Harmon’s goal of a fully fluid body surface, the team had to invent a wood veneer cloth to use in place of more usual glass-fiber or carbon-fiber weaves. That meant designing and developing specific looms, acquiring rolls of veneer five inches wide, slitting it into bands sixty feet long and an eighth- or a quarter-inch wide, weaving it into cloth to place in female molds, and then vacuum bagging it with epoxy resin. Those looms-wood, of course-are works of art, using wooden clothespins machined to feed veneer strips through their jaws. With too much tension, they slipped; if there wasn’t enough tension, rubber bands attached to the clothespins compensated. It was wonderfully elegant, wonderfully simple.

Why is The Splinter So Fast?

Harmon said the entire car weighs an estimated 1,360 kg and because it’s made of wood he claims it boasts a better strength-to-weight ratio than steel and aluminum. While it wasn’t built specifically as a performance machine, he pointed out that the combination of the Splinter’s weight, shape, gearing and power could mean it’s capable of reaching speeds of up to 386 km/h. However, the car is unlikely to be put to the test in this regard.

What Inspired the Splinter Supercar?

This project was inspired by a WWII airplane called the “de Havilland Mosquito.” Made almost entirely out of wood, the plane was equipped with two Rolls-Royce V12 engines and was supposedly the fastest piston-driven plane of its era.

To learn more about this project:

Watch this feature by Inventing the World.