Unalam: Committed to Quality and Innovation 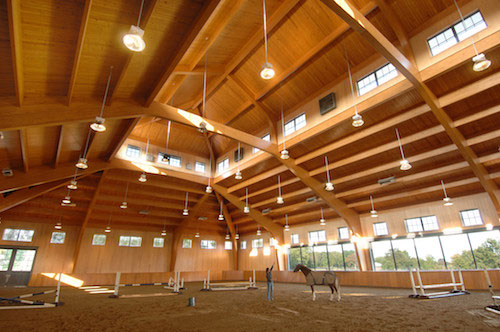 Though it started out in 1892 selling lumber and seed in a mill in Unadilla, New York, Unalam, an innovative manufacturer of laminated wood structures, has certainly come a long way since then.

In 1906, this 125-year-old multi-generational family business began making silos for area farmers. The early success of its silo business was a precursor to the steady growth and success Unalam would experience through the years.

After incorporating in 1909 as the Unadilla Silo Company, Inc., Unalam maintained its silo product line until the 1980s. Meanwhile, in 1928, the company added a new product line – glulam barn rafters – which has carried its success into the 21st century.

“According to legend,” relates Zoë O. van der Meulen, Unalam’s executive vice president and a 6th generation family member in the business, “my great-grandfather got together with a friend who owned a local glue factory and decided to make laminated barn rafters. That’s how we got into the laminated business.”

The laminated wood Unalam makes is called glulam, short for “glued laminated timber.” Glulam consists of a number of smaller pieces of lumber bonded together with durable, moisture-resistant structural adhesives. The end result is a single large, strong, structural beam.

These structural beams can be used as vertical columns or horizontal beams, as well as curved, arched shapes. The beams are connected using bolts or plain steel dowels and steel plates.

The shift to laminated products proved to be a very sound decision for their business.

“If we had stayed a lumber mill, I don’t think we would be here today,” adds van der Meulen. “Our ability to evolve with the changing marketplace and to grow our glulam business has enabled us to stay relevant, innovative, and competitive.”

With the continued success and growth of its laminated products division for more than three decades, Unalam in 1963 opened up a new laminated production facility in nearby Sidney, New York. It’s here at this 150,000 square foot plant that all laminated products are manufactured, while the original site in Unadilla houses the executive and administrative offices.

Today, Unalam specializes in manufacturing customized glulam products of varying sizes and shapes, though customers can purchase stock laminated beams in more traditional dimensions. But the majority of its products are custom made.

The company primarily works with contractors on a variety of jobs within a 500-mile radius of the plant, though it has also sold its laminated products beyond that, including Arizona, Colorado, and even Ireland. Their products typically go into sports arenas, churches, schools, and bridges, as well as garage headers, laminated countertops, light poles, picnic pavilions, and more.

Lee Young, Unalam’s maintenance supervisor, proudly declares, “If it’s built out of wood, we can build it.”

Unalam has also set some records along the way. In 1977, the company laminated beams for the Walkup Skydome at Northern Arizona University. For its first six years, the Walkup Skydome was the world’s largest clear-span timber dome until the completion of the Tacoma Dome in Tacoma, Wash., in 1983.

The company also glued the longest glue laminated beam in the world in 1998 – almost 175 feet. It’s part of a covered bridge about an hour’s drive from the plant.

Although the process of making glulam was invented in Germany more than 75 years ago, Unalam has been more innovative with it.

“We haven’t created a different process, but have taken the process to the extreme,” says van der Meulen.

“We look at what’s possible, and then apply our tools and techniques to come up with a finished product that’s more dramatic, imaginative, and aesthetically pleasing.”

Once a project gets underway, Unalam’s engineering and design team create the product in a shop drawing, including all its measurements. Although the lumber usually comes in 20-foot boards, they’re glued to the required lengths – often 100 feet or more.

To get the lumber to the specified length, they use a machine that cuts finger joints. These joints are glued together ensuring the boards attain the proper length.

After attaining the desired length, they plane the boards and glue them on steel forms. Unalam’s plant is large enough to allow them to configure the material they’re gluing into whatever shape or size is called for – S curves, arches, or straight pieces.

The process is relatively quick. Once the boards are sized correctly and bent to the correct shape, they sit overnight while the glue cures. After curing, the boards are taken off the form and sent to the plant’s finishing department where they cut the ends, drill any holes for connections, wrap it up, and ship them out by truck to the job site.

For decades, Unalam has built its reputation on a constant commitment to quality. Their assurance of quality starts with their rigorous monitoring of wood moisture.

“We manufacture products that need to not only look nice but also maintain structural integrity. That means when we glue our materials, the wood has to be below 16% MC (moisture content). Some jobs specify much lower MC. So we need to know that our products we’re gluing have the ideal MC or else the glue won’t hold and we won’t have a reliable product heading out the door,” says van der Meulen.

To ensure quality glulam products, Unalam continuously checks for moisture in the Southern Yellow Pine and Douglas fir timbers it uses. Although the wood brought in has been kiln dried, MC can increase to unacceptable levels during transportation and storage.

“We’ve had some issues in the past where we paid for premium material and ended up with a very wet material,” notes Young.

Therefore, when lumber comes off the truck, Unalam’s quality control department spot checks the lumber for moisture using Wagner Meters’ L601-3 handheld moisture meter. What they find determines whether or not they’ll put the lumber into production or put it aside for drying.

“If the meter tells us we have a wet load, the lumber’s put aside with a fan blowing on it and stickered so the air can flow between the boards to dry out. We’ll spot check it again a couple weeks later to make sure the MC is below 16%. We don’t want to send it through the chain if we don’t have to in order to save time and money,” says Young.

Lumber put into production is checked again for moisture using Wagner’s 683 in-line moisture measurement system. As the lumber passes through lengthwise, the 683 measures moisture levels along the entire length.

When the sensor detects excessive moisture, it sprays green paint on that part of the board. When the lumber comes out, the person stacking the lumber can easily see the green paint. He then stickers and stacks the wet boards separately so it starts to dry out.

“We’ve been using the 683 system since 1993. Funny thing, Wagner says this system is obsolete and they no longer manufacture it. But it’s performed great for us these past 24 years,” says Young.

For more than 100 years, Unalam has been an innovative leader in glulam manufacturing. It has a reputation for creating striking, exposed applications such as spectacular vaulted ceilings, magnificent arches, and soaring dome roof systems for large clear-span structures.

“From our 1906 invention of wood silo door technology to our earliest experimentations in glulam in 1928, we continue to stand behind our commitment to crafting solutions for today’s building needs . . . and our promise that if it can be done with wood, Unalam can do it,” says van der Meulen.

Thank you to Tony Morgan and Wagner Meters for this article!

Tony Morgan is a senior technician for Wagner Meters, where he serves on a team for product testing, development, and also customer service and training for moisture measurement products. Along with 19 years field experience for a number of electronics companies, Tony holds a B.A. in Management and his AAS in Electronics Technology. Call Wagner Meters today at (800) 634-9961 and ask for Tony, or visit www.wagnermeters.com.